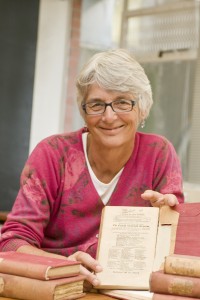 “The book historian Jonathan Rose recently claimed that marginalia has no discernible pattern, its only pattern is no pattern, but the Brancepeth library offers a counter argument. Many of the marginal comments and marked passages are made by one reader and his repetitions and preoccupations are a kind of self-portrait.  As a whole the way readers have scribbled in the books, and the uses they have put them to, is revealing about the interactions between the library and the social world in which they lived.”