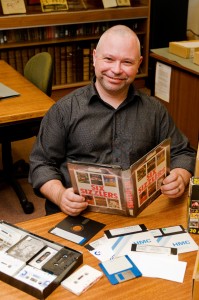 ‘NZTronix: The Early New Zealand Software Database’ was a project to
build a publicly accessible database, initially to gather and preserve information about early New Zealand computer games, later more broadly concerned with
early New Zealand software. The project was an interdisciplinary one … and it  gathered research resources, set up a website and a blog, and conducted research on emulation software.’ (NZTronix finding aid, J C Beaglehole Room).

“A major challenge for us is how to preserve  and access our collection.
Unlike a book, we cannot read the contents of the items without having access to possibly obsolete hardware. Worse, the media itself may have decayed and
become unreadable.”
Joan Druett, Author (http://www.joan.druett.gen.nz/)
Tupaia’s Map 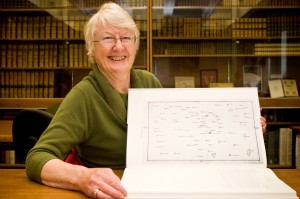 “In 1769 Tupaia (the fascinating Polynesian navigator who sailed with Captain Cook on the Endeavour, piloted the ship about the Tahitian islands, and was able to communicate with the Maori of New Zealand), with his “own hands”, created a map of the tropical Pacific, extending about 4,000 kilometres in an east-west direction, and containing a myriad of islands Europeans had never heard of before. One copy of this map survives. Is it the original?  Joan Druett argues that the answer lies in a book of charts held by the JCBR.”