An interdisciplinary seminar on items from the Library’s Special Collections, and their use. All welcome.  JC Beaglehole Room – RB404.

From Science to Non-Science: Chemistry at Victoria
The Hundred Years from 1899 – A Personal Perspective

Over the past months information has been gathered for a personalized history of Chemistry at VUW from its inauguration in 1899 through the 20th century. This has involved considerable periods of time using the facilities of the new Beaglehole Room (and causing its staff much disruption to their days!). The results of the searches using the calendars of Victoria College, Victoria University College and Victoria University, and the ‘Chemistry’ archival material stored in the (new) MacDiarmid Archive facility have provided much valuable information and many images . Coupled with the early calendars of the University
of New Zealand (UNZ), its Roll of its Graduates, and a range of VUW Library on-line data bases, a perspective of ‘Chemistry’ at VC, VUC and VUW has emerged. The short presentation will include some of this information and relevant images – but I am no historian!

Victoria House as it was and might have been

Walk south from Salamanca Road down the west side of The Terrace and you’ll notice that almost all the way to Victoria House at No. 282 the Victorian streetscape survives. Into this neighbourhood the first university hostel for women students emerged in 1908. In those days this end of The Terrace hosted
the homes of some of Wellington’s social elite and a private girls’ school, but also boarding houses and one of the city’s gaols. This research – using Victoria House’s archives from the Beaglehole Room, as well as plans and records from Wellington City Archives – has followed the progress of the buildings on and near Victoria House from that time. The project has inevitably become caught up in other aspects of the area’s history, including the fire that ravaged Maurice Terrace and McKenzie Terrace in 1922; disputes over access to properties; and the demise of John Duthie’s grand house on the opposite side of The Terrace, which could have been the site of a building like Weir House, but instead became a private hotel, then a boarding house, and eventually a ruin swept away at the time The Terrace tunnel was built. 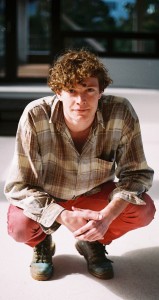 On enrolling for Victoria, I was under the impression that the University had a “Lunchtime Theatre”, a vibrant weekly gathering where students could try out brief and innovative theatrical works on a willing audience.  I found very soon upon entering the University that the Lunchtime Theatre had disappeared in the mid nineties, along with the Dramatic Society that had organised it.

On dipping my toes in the Beaglehole room archives, I found the Lunchtime Theatre was only a small portion of what must have been one of the most prolific clubs in the history of New Zealand’s Universities; one that was performing ten full-length shows in 1974!  Figures such as Richard Campion, Stuart Devenie, Roger Hall and Jo Randerson have all been involved with the club in the early days of their careers.  This year I have been attempting to establish a “performance lab”, a club for interdisciplinary cross-fertilisation between performers, a club that follows somewhat in the footsteps of the Drama Club.  The benchmark could not be much higher.