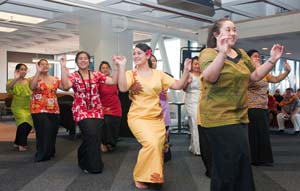 On Friday the 1st of June, Samoans the world over celebrated the 50th anniversary of Samoan independence and the J.C.Beaglehole Room let its hair down a little and joined in. 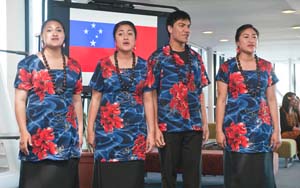 With assistance from the Assistant Vice Chancellor (Pasifika) Luamanuvao Winnie Laban, the Library was able to second a staff member (Mishelle Muagututi’a) to the Beaglehole Room part-time to work with material in the collections to build an exhibition which would honour the history of Samoan independence. 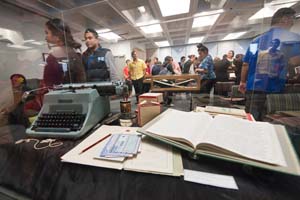 The foundation of the exhibition is the work of Mary Boyd, a student of J.C.Beaglehole and an historian at Victoria University for 40 years, one of whose areas of particular interest was the decolonisation Pacific.  Mary Boyd  was on research leave in Samoa during the first Contitution Convention in 1954 and again in 1961, just prior to independence.  She gave her papers to the J.C.Beaglehole Room in 2010, providing a valuable resource on these and other areas of her work for future researchers. 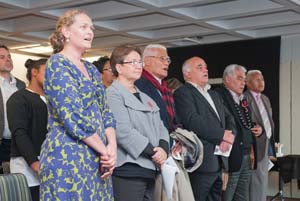 The event was blessed by the Reverend Tauinaola Tofilau and launched by Professor Penny Boumelha, Deputy Vice Chancellor (Academic).  The Samoan anthem Samoa Tula’i was sung by all, with particularly beautiful harmonic assistance from 5th Melody.

Another part of the work Mishelle has achieved is the commissioning of a short video, promoting the J.C.Beaglehole Room and its collections, with Mary Boyd’s papers again as the focus.  You can view this from the JCBR home page.

The exhibition covers the 50 years prior to and including 1962 and will run until August 1st, with the addition of some artwork done by PASI 101 students as part of their assessment.  From August 1st to August 31st, we will shift the emphasis to New Zealand’s relationship with Samoa in the 50 years since the Treaty of Friendship was signed (13th August 1962).

On Thursday 28th June from 12-1, the JCBR team will talk about some of the resources which ‘came to the surface’ during the preparation of the exhibition, even if they didn’t make it into the display.

This entry was posted in Events. Bookmark the permalink.