Apologies for the short notice – I hope you’ll be able to join us for  the last 3B3S of 2012, which has quite a political flavour.

Sidney Holland
Material from the papers of A.D.Robinson  (A1987.10)

Sidney George Holland was instrumental in the founding of the National Party, leading them for nine long years in Opposition before finally becoming Prime Minister in 1949 – ending 14 years of Labour rule.  Best remembered for his decisive handling of the 1951 Waterside Strike and abolishing the Legislative Council (the upper house of Parliament), he has largely been forgotten by history and the distinct lack of a published biography on Sid is a serious gap in our literature.  For my Political Science Honours thesis I have been researching the man and the myth of Sid Holland, attempting to more closely understand the cunning politician who welded the disparate elements of the National Party together to make it the party that Governed New Zealand for much of the latter half of the 20th Century.

The Alliance of Labour
Material from the papers of Jim Roberts (A1972.01)

‘The Alliance of Labour was the major trade union federation during its lifetime (1919-36). I’ll briefly discuss its vote for a general strike in 1923 against across the board wage cuts, an important and unusual event that has been largely overlooked.’ 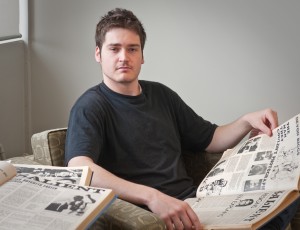 I have been conducting research into student activism at Victoria University of Wellington during late 1960s and early 1970s with a particular focus on the anti-war movement, the anti-apartheid movement and the movement for women’s liberation that began around 1970. This period was one of global protest and dissent, and my approach to the history has been to analyse the ways in which students at Victoria were influenced by overseas movements during the period, and how strategies and tactics for activism here were inspired by overseas models. For example, the large-scale anti-war mobilisations coordinated by the Student Antiwar Movement and the Committee on Vietnam, both based at Victoria, were inspired by American anti-war mobilisations. Similarly, the small consciousness-raising groups of the women’s liberation movement at Victoria, such as the Women’s Liberation Front, were based on American models of organisation. The student magazine at Victoria, Salient, has been crucially important to my research, as have been the offical records of the Students’ Association. My interest in the history of student activism at Victoria has developed out of my own involvement in activism in the present, and out of a belief that the history of student activism in New Zealand has been largely ignored by mainstream historiography.

This entry was posted in Three books, three scholars, Uncategorized. Bookmark the permalink.