Following on from the tradition of the 3 Books, 3 Scholars seminar, we are pleased to be presenting a lunchtime seminar in which items from the J.C.Beaglehole Room collections are featured.

On Monday the 30th of May, we will have two researchers speaking:

In 1986 Gavin Woodward, Victoria University photographer, undertook what could be regarded as his most important, and thorough, photographic assignment for a book on Futuna Chapel entitled ‘Voices of Silence’ and  written by Dr Russell Walden, Associate Professor of Architecture at Victoria University. Gavin’s photography beautifully captured the architecture, space, light, materiality and voice of the Chapel in a series of intense colour photographs. Gavin Woodward died in a tragic accident on the Chathams in 1996 when he was volunteering for DOC in a bird counting exercise.  In 2006 the Futuna Charitable Trust took ownership of Futuna Chapel and began its mission to restore the building and bring it back to a new and meaningful life, a life that befitted its status as one of New Zealand’s architectural crown jewels. 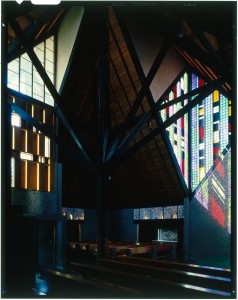 A gathering of material related to the Chapel commenced and Gavin’s transparencies became the Holy Grail but despite numerous inquiries they were not found. Gregory O’Brien current Stout fellow at Victoria and trustee of the Futuna Trust initiated a project for a new book on the chapel in 2014, a book that would tell the story of the new fortunes of  the chapel following its sale to a residential developer. Serendipitously in September 2014  over 200 of Gavin’s 5 x  4 colour transparencies were lodged in the JC Beaglehole Room by the Victoria University’s School of Architecture.

Raymond discusses the French art magazine Cahiers d’Art, which was published between 1926 and 1960, and its role in his research on the relation between surrealism and modernism.

We hope you’ll be able to join us.