An interdisciplinary seminar on items from the Library’s Special Collections, and their use.  All welcome.  J.C. Beaglehole Room – RB404. 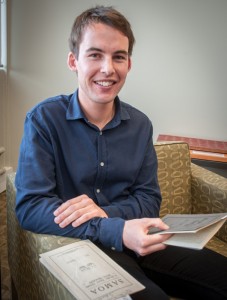 H. E. Holland was the foremost critic of New Zealand’s Samoan Administration in the country during the years he was in Parliament, 1918-1933. The Labour Party leader’s devotion to issues of justice in Samoa was legendary; Holland’s colleague John A. Lee coined it a ‘Samoan Complex’. As well as voicing his criticism within the debating chamber and out on the campaign trail, much of his opposition to New Zealand’s Samoan policy was received by the public in pamphlet form. Holland’s three Samoan pamphlets (all held by the J.C. Beaglehole Room) formed the spine of my 2012 honours research essay in which I argued that the legacy of Holland’s “complex” has been generally under-appreciated in both New Zealand and Samoa. These texts, alongside his other anti-imperial pamphlets, hold further relevance for my current MA research which is on domestic critics of New Zealand’s Pacific Empire more generally. Here I also hope to pose that the role of pamphleteering as an efficient and effective means for the wide dissemination of political propaganda was an important function within these types of counter-cultural discourses.

Speaker: Nigel Isaacs, Senior Lecturer, Architecture
Resource:  Chronological Tables Of The General Statute law Of New Zealand,
As Existing At The Close Of The Session Of Parliament, 1882.
Reference:  K3 NZ 1882 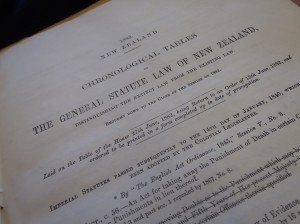 Early New Zealand legislators were concerned with the effects of fire on citizens and their property. Fire legislation was listed in legislative summaries. The first fire legislation (Province of Wellington “Town Protection Ordinance 1857”) might be thought to be the earliest building related legislation, but in fact the Auckland Provincial Government had passed the “City Building Act” in 1854. , It turns out that the summaries did not include any building control legislation. This is a research tale of being misled by published summaries and the adventure to track down the truth.