Vote for us! Electoral advertising leaflets from 1890 to the present on display

A few years ago we received a donation from Les Cleveland which included his collection of election advertising, dating back to 1890.   We have made apoint of collecting party political leaflets each general election since then, by the unscientific but reasonably effective method of asking staff members to bring in the leaflets they have received in their letterboxes or at meet the candidates meetings.

With a general election imminent, it seemed like an opportune time to showcase some of this material.  It is fascinating to see what has and hasn’t changed over the years.  Which should we tax? from 1890 discusses the merits of a taxation on land versus labour.   Big Business Speaks from 1925 suggests that big money is having undue influence on the governing of the country.  Who owns this country – Comalco or the people of New Zealand? from 1970 reiterates that point in referring to the raising of Lake Manapouri to supply cheap energy to the aluminium smelter at Tiwai Point.  A Salient special issue from 1966 reports on an attempt by a senior official of the National Party to obtain infomration from the Security Intelligence in order to discredit an opponent.  Meanwhile National Party leaflets from the 1940s emphasise the perils of socialism (A Fireside Chat 1943 and Russianising New Zealand 1949) and one from the 1950s uses an image of snake-charmer to portray Social Credit theory.  And from time to time, we find guides to young voters such as this one: 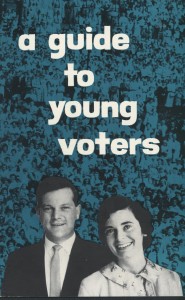 Employment (or the lack of it), housing (likewise), education, health…It seems the main thing that has changed about the message is the way it is presented, reflecting advances in technology (from plain paper monochrome, with simple illustrations, through to full colour with photographs on glossy paper) and perhaps changes in the way we deal with information (from quite lengthy discursive messages to the reading equivalent of sound bites now).

We also see the move from no particular party affiliations in the 1890s, through the almost binary National/Labour (with the occasional bit of Social Credit and beginnings of Green) period from the 1930s through to the 1990s, and then the emergence of a range of minor parties to add to the mix.

This year, the other thing we’ve noticed is that there doesn’t seem to be the same volume of letterbox advertising – at least not so far.  With 10 days to go we could yet be inundated, but so much more is happening via social media now, that I somehow think not.

The display is spread between Level 2 and 4 of the Kelburn library and will be there until September 28th.  I hope you’ll be able to come and see it.